A Cup of Expression, I Love PH, Inspire Someone Today, It's More Fun in the Philippines, New year, Year 2015

Another year has come. We have passed another 365 days of our lives.

I don’t know exactly what you have been through in your year 2014. Maybe you had very difficult times in your life with your family or friends, or maybe you have been swimming in an ocean of debts, or your heart was broken by someone. But I want to congratulate you now for overcoming such trials and pain. I admire you for always seeing hope in life and doing what you can to live better and welcome 2015 with a brand new life.

I’d like to tell a story about a young man who belongs to a tribe. He will celebrate his 21st birthday. But it is already a custom in their tribe that if a man will turn 21, he will be sent in the middle of a forest (without food,water and light) to test his bravery.

At sunset of his 20th year, he was brought by his tribe in the darkest place of the forest. He only has a piece of spear for his defense from wild creatures and he must stay there until sunrise so that he will be called worthy of becoming a man in their tribe. He know that all his friends and family left him alone in the forest.

In the middle of the night, with zero visibility, he only hear sounds from wildlife. He is so afraid deep within. He is thinking that a wild animal might attack him any time. He could not even sleep.

Then he heard movements of leaves and branches, as if someone or something is watching him all night. Few hours have passed when fear is consuming him and shaking him more. Until he finally get emotional and cried out of fear.

Few minutes more and the raise of the sun strikes his eyes, at last! it is already dawn. He then saw a figure of a man standing right behind him. After a few seconds, he figured out that it was his father.

He then asks his father., “How long have you been there?”

“I’ve been here since last night when they brought you, and I never left.” He replied.

We, sometimes are like that boy. We worry so much, we fear so much. We think of the fearful things and felt alone in the dark. But God is like the father of that boy who have never left the boy from the start. He is there right behind us to catch us if we fall, or defend us when a wild animal attacks. He guards us in our darkest hours.

I too, faced so many battles in my 2014. It was arduous and tiring. It was sometimes desolate and gloomy. But what made me overcome and still be grateful for this past year is my faith in God. That no matter how life knocks me down, I have an extraordinary God to back me up.

Have you seen God in your trials? Have you been grateful despite of all your difficulties in life?

I pray that you will have a brighter and sparkling 2015.

May you receive your blessings,

Swimming in an ocean of debts? Do you want to change your life from a debt person to an abundant person? Sign up now for Truly Rich Club of Bro. Bo Sanchez. He will teach you numerous ways on how to live an abundant, blessed and wealthy life. Click Here: Truly Rich Club

Here’s Our Article For the Month:

I’m a member of this club. You should too! 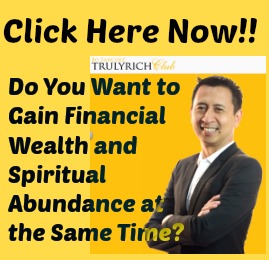